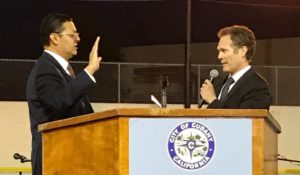 Cudahy City Councilman Jack Guerrero (Pictured top left) was targeted for defeat by union and Democratic Party leaders after his efforts to reform his troubled city government and impose fiscal discipline. Jack was the only city council member to oppose an increased parcel tax, and he has been an advocate for reform. Jack beat back a tough and nasty campaign from the opposition to emerge as the top vote-getter for City Council. GROW Elect was integral to Guerrero’s re-election. He asked GROW Elect President Ruben Barrales (Pictured top right) to administer the oath of office during his swearing-in ceremony this past Monday.

Gloria Olmos Sworn In As Mayor of South El Monte

GROW Elect candidate Gloria Olmos (Pictured above) also won a tough and bitter campaign – where she was attacked for challenging the status quo in a city that had its last Mayor removed from office for corruption.  She was also viciously attacked for being a Republican.  With GROW Elect’s help she won a sweeping victory to become the new Mayor of South El Monte. Gloria took the oath of office last week and she is now advancing her reform agenda.  We are proud to add Gloria Olmos to the growing ranks of GROW Elect’s elected reformers. 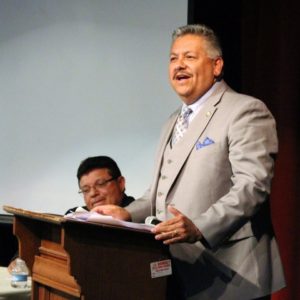 Newly elected Downey City Councilman Rick Rodriguez (Pictured top right) is off to a fast start in delivering on his campaign promises to make public safety a top priority and to boost economic development. Rodriguez brings longtime personal experience to both issues.

Rodriguez has served as a Law Enforcement Chaplain for the Los Angeles County Sheriff’s Department and is the founder of a successful business that operates in 18 states, 3 countries and has employed over 1,000 people.  Rodriguez has become a fixture at local Neighborhood Watch meetings — meeting with residents and promoting the program. He is a strong advocate for community engagement to help combat crime and he was President of the community organization G.O.O.D. – Gangs Out Of Downey.

Rodriguez has also been building on Downey’s pro-business policies and helping to open new businesses and welcome employers to the city.